The week before Ireland went into the first stage of the Lockdown, I was fortunate to spend the weekend in  Westport and Achill Island.  The trip was planned last minute as the weather outlook wasn’t fantastic but we persevered anyway.

It rained all day Saturday on our journey down, but it didn’t dampen our sprits and many laughs were had on our road trip.  It really doesn’t matter where you are going its the company your with that makes it!

We arrived in Westport late that afternoon and after checking into our respective B and Bs we headed into the town on the hunt for food. We stopped at J.J. O’Malleys restaurant  and had a lovely meal. Would highly  recommend J.J. O’Malleys, the food was amazing and the atmosphere was great. That night we of course headed for a few sociable beverages, as one must when away!ha We headed first to Matt Molloy’s for one (or two) and then over to Morans for another couple. Morans was lovely and quiet, one of those old Irish pubs with a shop in the front bar. We ended the night in Cosy Joes late bar.

On Sunday ,after we slept off the drinks from the previous night and fuelled up on a fry up in the B and B, we headed out to Achill Island to begin our day of shooting. The weather was very changeable, the sun could be splitting the stones one minute and then literally the next the clouds, wind and rain would roll in. It meant it was difficult shooting, jumping in and out of the car to grab the shot but the skies and light were so dramatic that it just added to the shots.

We headed out to Grace O’Malley castle first and got to shoot for about 5mins before the rain started. The quick change in weather really meant you had to push yourself to grab the shot quick. I would often overthink when I’m shooting and change a setting here and there or change position very slightly, but here I felt just see the shot, jump out and take it. It really helped to push my boundaries when shooting.

Next on the Wild Atlantic Way trek was the White Cliff’s of Ashleam. The light here was just incredible, literally each second the light changed as the clouds rolled by so fast. I managed to shoot my first panoramic which I was delighted with how it turned out. Ive never done stitching on lightroom and decided to give it a go. Its definitely something I want to try more of. We managed to get about 20 mins shooting at the cliffs, we did have to jump into the car on a couple of occasions however and the wind was so strong you could not let go of the tripod for fear of it being whisked away.

After the cliffs we went to Keel Beach. Here there were two waterfalls streaming down from the cliffs. We were very lucky here, after an initial shower that made us run for the cars for 10mins it cleared up for around 30-45 mins. This was the longest we got to shoot anywhere on the day. Some of my favourite shots from the day were here. I have recently gotten Formatt-Hitech filters and I love doing long exposures especially with water so I was ecstatic  when we pulled up and I saw the waterfalls.

In post processing I also tried some more merging of photos, again not something I had ever messed around with before. This picture is a combination of 3 photos in an attempt to bracket the photos to achieve good lighting throughout the shot.

After Keel beach we went to the other side of the Island to try and catch the sun setting however the clouds were not playing ball and it started to rain again, and then we realised we may have a better chance back over where we were so  we decided to head back over towards the Ashleam cliffs. The wind along the cliffs was unbelievable. We had to pull in as the force was so strong it got dangerous to drive in. When the wind subsided slightly we drove on thinking we had missed our chance at a sunset but delighted with the shots we had gotten throughout the day. Just as we started to climb the winding road up towards the Ashleam cliffs we looked out to the sea and you could see the scene staring to unfold on-front of us. The sun was just setting and the clouds so dramatic and dark, it made for fantastic shots. There was a battle to get the shots, no tripods could be taken out as the wind was just so strong, we had to battle against the wind and try and hold as steady as we could. Safe to say the ISO had to be bumped up to allow a fast shutter speed to avoid camera shake as much as we could.

Delighted with our sunset shots we regrouped in Mallaranny before heading back towards the midlands. We were tired after the day shooting but absolutely delighted with what we got and the craic we had just made it all the more enjoyable. We are already planning a return trip once restrictions lift.

Click and browse through the album below for more pictures from our weekend in Achill: 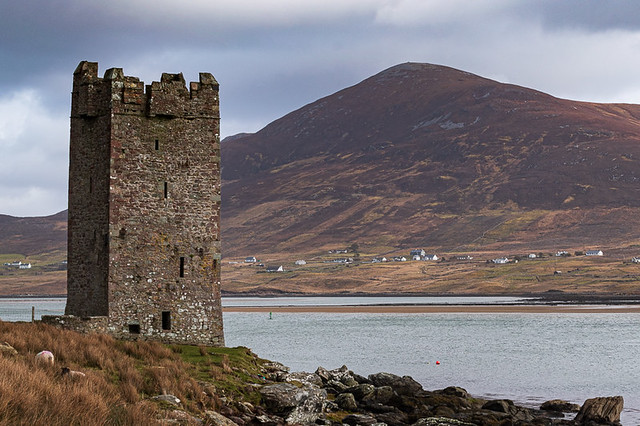 Im an amateur photographer with a keen interest in landscape photography. My aim for this blog is to showcase the beauty in my local area and beyond. View all posts by rosemarycumminsphotography